I have just read a piece by Australian author Ilka Tampke whose book, ‘Songwoman’ was voted the most ‘underrated book of the year’.  Her article in the Guardian starts by saying, ‘Writing is tough. My book went so unnoticed I won an award for it.’

Going unnoticed is the plight of so many of us writers. There could be an award for the most unnoticed book of the year. But I guess the underrated is better because not only was this book not noticed for some time, it was seen as a great book when it was noticed. Sadly, unnoticed may not necessarily mean a great book. But then, until we notice the book we won’t know.

Now that my book,’Mayhem in Melbourne‘, thanks to NSW Writers and Joel Naoum, is within waving distance of being published, my conundrum is how to make it known to the world – a world of readers who I want to entertain. If they don’t know about my wonderful book they don’t get the chance to say things like this;

”Hey, I really laughed when I read this bit called ‘What’s with the Fence?’… “

Or someone from the depths of a deck chair heaving up and saying “Hey, let me read you this bit – it’s just like an experience I had when I rented a couple of years ago…”

… or any of these

“You want something to read on the plane? Try Mayhem in Melbourne by Juliette Davis..,”

“Mayhem in Melbourne is just the book for a wet Sunday afternoon – full of sun and laughter – some wisdom too.”

“You want a relaxed easy read? Try Mayhem in Melbourne by Juliette Davis.”

There’s a book called ‘So Many Books’ by Gabriel Zaid written a number of years ago. He says that ‘Every day 4,000 books are published.  Is he right? How do you count?  It sounds like far too many.  Whatever the number the question is, how am I going to get my book to fight and struggle and wriggle and climb  its way through that Everest of books to appear at the summit where in the rarefied air readers hover? I haven’t come up with an answer yet. I’ll let you know when I do and any suggestions to help it on its way will be gratefully received. In the meantime I will visualize it up there waving a flag.

And yes, I got idea for the name of this post from Gabriel Zaid.

I love the cover he chose. It’s a great one to prove his point. 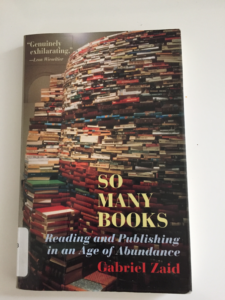 My flower of the moment is my Peace Lily, that sits by my desk. It is thriving and giving me endless pleasure. It loves its place in the world so much I am going to have to find it a bigger pot for it before it suffocates from lack of space.

Peace from a lily

Self Publishing and are Regular Publishers Arrogant