Riding Melbourne tram route 78- it is a unique experience

Route 78 – an old tram waiting for an up-grade

Last week when I was traveling  from South Yarra to Prahran on the 78 tram the only free seat was opposite a dark skinned older man.  He had a swollen eye but it didn’t look like a the result of a punch up.  It looked more as if it was suppose to be that way.  He sat very still and stared straight ahead.  I gazed passed him and out the window.  No eye contact is my go to position on this tram.

Two impeccably dressed young women were across the aisle checking their phones.  At the back of the tram a group of school boys shouted and joked and pushed each other around.

After about 5 minutes the man opposite me began to twitch and jerk his legs; he scratched his head and then the back of one of his hands, then the other.  He jumped up and pulled the bell cord and charged for the exit. I felt lucky my shins had been spared the attentions of a twitching and kicking leg.

He danced around at the door but didn’t get off at the next stop.  At the following one he made a last minute decision and shoved passed a young man in a dirty pink cap who was getting on.  As the tram pulled away I saw my seat companion punch a large blue plastic rubbish bin.  It wobbled and he got ready to give it second punch but the tram moved on and I lost sight of him.

Pink cap asked the two girls where they were getting off.  They ignored him. After his second demand to know this they got up, pulled the bell and moved to the door chatting about where they would buy some bread.  He gave them advice.

“The best bakery is in Carlisle Street.  It’s Russian.”

They didn’t even look his way.  It was as if he hadn’t spoken.

“I’m telling you if you want bread that’s where to go. It’s the best.”

They got off without a glance in his direction.  It was as if he was invisible.

He swung round in his seat and addressed us all.

“You can’t tell some people. They never listen. You just can’t tell them.”

Friends and colleagues have discussed the 78 tram with me.

“I’d never get that tram.”  And they tell  lurid stories of the times they did catch it.  These anecdotes usually concern, people who don’t appear to have washing faculties available at their residence.

Or, it maybe they like the over-powering smell that emanates from them and don’t want to lose it. You can never tell on the 78 tram. I ride this tram about twice a week and every journey is different. 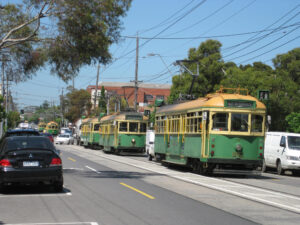 These lovely old W Class Trams used work the route. When six trundled along together it was something of a last hurrah
They have been replaced by something newer but not so charming.