I have been browsing my book Mayhem in Melbourne – Behind-the-scenes at Caruthers Real Estate. COVID has given me time to do this. 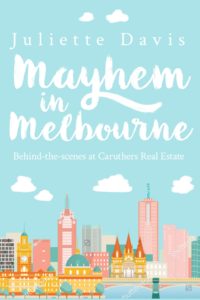 It’s about my life as a Residential Property Manager, the people I worked with, the ups and downs and the fun.  I’ve been re-visiting some of my favourite characters.  It is fantastic to meet up with them again so I have taken them out of the pages to spend time with them.  These characters are a composite of people I worked with but now with their new identities they are friends I know under their new names and personalities.

Take Ralph for example. He is one of my favourites. He rented an un-renovated two bedroom, downstairs unit in an old apartment block.  The rent was cheap but higher than it should have been because of the area.   We had developed a friendship but it went very wrong when he vacated.

He rang to say he was moving. He was always energetic, chatty and friendly but in this phone call he was lit up.

‘I’m moving. I’ve bought my own place.’ His excitement was catching but I also felt a small fission of sadness.

‘Mum’s always saying I should do this. She says don’t pay rent and make someone else rich. So I’ve taken the plunge.’

‘Wow I say,’ inadequately. I didn’t know he was thinking of buying and I was a bit shocked he hadn’t told me.

‘Where did you buy?’

He named a place then said, ‘You know where it is? Further east from here. It’s a two bedroom town house…only a couple of years old…great bathroom and kitchen’

‘That’ll be a change,’ I say trying to find the right words.

‘No bath though. I rather like that old bath. A good place to soak on a cold winter’s night.’

This made me remember that there was no heating in his rented unit. He must’ve supplied his own. He chatted on.

‘It’s a bit further out of course but it’s near a shopping strip and there is a good cafe. I went there after the auction. I was shaking. I needed coffee, badly. It was good coffee.  So that’s okay.’

‘Congratulations,’ I said a bit belatedly. In the real estate world we are always saying congratulations. A bit silly I think but I keep saying it. I say it to Ralph as I feel a gap opening in my life.

‘Yeah. Thanks. It’s a great feeling but scary. I woke up in the middle of the night on Saturday really worried. All sorts thoughts went through my head. What happens if there’s something wrong with it that I didn’t notice? What happens if there is a lot of maintenance?  I’m at the top of my budget, not much spare cash. I couldn’t sleep’

‘Buyers’ Remorse.’ I said. ‘Lots of people feel like that. That’s why it’s got a name. Buyers’ Remorse. Regretting what you’ve done and a feeling you may’ve been swindled. Sort of panicking. It happened to me after I bought my place.’

‘Yeah – a bit like that’. Ralph sound relieved. ‘It was the worry about the money and the maintenance and being afraid I’d been suckered in. I drove over on Sunday and looked at it. There was the For Sale sign with a big ‘Sold’ on it. I took a selfie beside the board. I made sure I got myself right in front for the sold sticker. I didn’t do that on Saturday. Then I walked up and down the street and had coffee in the cafe. I was excited then. It was as if I was already living there and part of it all. Now I feel it is the best thing I’ve ever done. Forget Buyers’ Remorse.’

While he talked I visualized the last time I was in his unit. He liked to be there for an inspection so we arranged it for the end of the day.

When I arrived, he would be brewing coffee.

His interior styling made this nothing-unit into something else. It was one of those old places that still have pelmets and curtain rods in place. He’d put curtains over the white plastic slim-line venetians that were supplied. His curtains in the lounge were deep red, almost burgundy, with a bright green pattern. They looked a bit exotic against the yellowing off-white walls and his pictures added to the exotic vibe.

He had a couple of large pictures, one with a scene of a lake at dawn and the other was a skyscape of a large city, probably New York but I wasn’t sure. I think I have seen one like it in IKEA. It took up the back wall of the lounge. I visited many times and for some reason I never asked where he got it. It just never came up.

A large black and white cow skin hid some of the tired carpet and half a dozen lamps glowed. Perhaps these were from IKEA too but the effect was about as far away from Scandinavian as you could get and light years away from this dull 1970’s concrete block in Melbourne.

One of the bedrooms was set up as a study with a lot of dark wood and more of the same curtains. The other bedroom had the windows closed off with gun-metal grey curtains. A king sized bed took up most the floor space. It always thought it was a miracle that he got that bed through the door.

After I had wandered through and checked everything was still as immaculate as it was at the last inspection, he poured coffee and I sank into his squashy leather couch and we chatted. He was always interesting.

He travelled a lot for business and told interesting and funny anecdotes.  I felt we clicked as people.

I imagined when he got home after a long plane ride the flat was like his cave. To my knowledge he didn’t ever open the curtains or the venetians. Strangely it didn’t smell stuffy or shut up so he must have aired it sometimes. Having it so closed up was a recipe for mould but it never smelt mouldy. It smelt of freshly brewed coffee and the sofa gave off a light and pleasant leather smell. It was hard for me to leave, to heave myself out of the deep squishy sofa and into the old grey concrete foyer and head off down the grey, cracked, concrete driveway and into reality.

I will miss him and these visits. I had hoped to follow up his invitation to visit him in his new place – the place that was’ further east’. That was all put on hold as our relationship went into a downward spiral.

New word added our dictionary – UooUoos are out there to be discovered.