Friends and writing -it is a strange mix.

It’s taken me a while to write this post … I don’t want to offend anyone or lose a friendship… it is more that I’m writing to get an understanding of my friends who aren’t writers or readers.

Writing and publishing my book ‘Mayhem in Melbourne’ has been a huge mile-stone in my life.  Yet I have at least three friends who I thought were close friends, who four months after publication haven’t read it.  I put a copy in their hands so it’s not a problem with access or the cost.

When I see them, I don’t say ‘Have you read Mayhem in Melbourne, yet?’  I don’t say anything. I don’t say anything because I think the whole thing embarrasses them. They have never known anyone who wrote a book before.  They have said this and I think it puzzles them. Authors to them are people in a different stratosphere. A stratosphere you sometimes see on TV or at ‘writer’s week’ which, of course, they don’t attend.   Writers aren’t the people you share a drink with after a shit day at work.

If someone else mentions ‘Mayhem in Melbourne’ I can see they become uncomfortable.  Of course this maybe because they have read it and didn’t like it and don’t know what to say.

But possibly not. One of these friends said just before lockdown with some embarrassment,

‘Sorry I haven’t read your book yet. It’s by my bed but I have been so busy lately I just haven’t got round to it.’

She is still working during lockdown and being in real estate with all the problems that is presenting she is probably still too busy.

But back to where I started. I think they are uncomfortable. I work as a property manager and I don’t talk about writing.  It’s my hobby and of little interest to my colleagues. I had something published in the The Age a year or so ago and they were bemused as to why I bothered. Maybe the fault is mine.  Should I talk about it even when I sense no interest?

When you write and have always written, even if it’s a diary or something about the sounds outside your bedroom window, it is hard to understand a world of people who aren’t in the least interested in doing so themselves.  Many don’t read much. They talk of TV programs and sport around the water cooler. We writers need to lower our expectations about dear friends who don’t read and aren’t particularly interested in the written word.

I believe that friends from different walks of life make our writing and our lives richer. I have tried to stop expecting these friends to mention my book or asking if I am writing anything else. If they do I will see it as a real mark of friendship.

I also believe that as writer we can’t expect that our friends like everything we write and they shouldn’t be embarrassed to say something like,

‘Good on you for writing it but it’s not my cup of tea.’  Or as someone I know who doesn’t read a book only magazines said,

‘Great. I dipped into  it – some really good bits.’ I appreciate her effort.

This is a conundrum I’m yet to solve. Perhaps others have solved it. Please comment if you have. 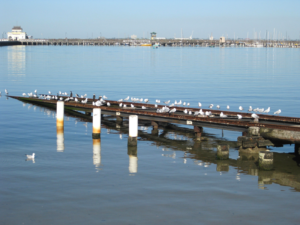 Seagull at St Kilda Beach during the 2020 lockdown.
They are free to roam.