This is an amazing time in Australia.  It is a time where the country pulled together, cared for each other, looked out for each other and followed the rules. By doing this we have stopped COVID – 19 in its tracks. Not conquered yet but certainly halted it.  We believed all  lives mattered in this wonderful multi-cultural nation of ours.

Watching the weekend marches you could be led to believe that ‘Only Black Lives Matter’. Of course Black Lives matter and all of us whatever race we belong to are horrified by the actions of the police officers in Minneapolis.

It is right that we need to focus on our First Nation people who are not given the care they are entitled to as citizens.  If this doesn’t happens and they die in police cells or while under police care, it needs to be called out.

Demonstrating in the weekend, against medical advice, and showing your support for the cause was, in my view reckless. I believe it showed a lack of respect for all those people who quarantined themselves. The people who didn’t see their grandchildren for weeks, didn’t attend family weddings, had the heartbreak of missing loved one’s funerals and were unable to attend ANZAC services.  These people and many others including the front line workers made large sacrifices to keep this country as safe as humanly possible from the surge of deaths we saw in other countries from the pandemic.

Perhaps we have been so successful that all those people in the weekend showing no social distancing feel that we have conquered the virus. 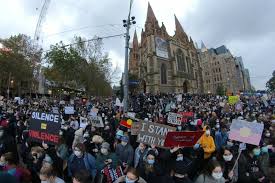 I only hope they’re right.  If we have another outbreak and the country has to be shut down again, as has happened in other places, there will be more economic strain and more deaths from this virus.

I hope the demonstrations in the weekend for a cause I heartily believe in are just a blip on the radar and we go back to respecting and celebrating the people who have sacrificed themselves over the last three months for the good of everyone.

I don’t normally write on political matters but I felt strongly about the lack of respect being shown. I am also sad that the controversy around the demonstrations deflected some or the focus from the very worthy cause they were bringing to our attention.

Friends and writing -it is a strange mix.