Writing and Self Publishing

I have spent the last few days deciding on a cover for my novel, Mayhem in Melbourne.

I had two very different concepts to choose from.

So hard to choose!

They are both great. But I’ve bitten the bullet and made a choice.

Strangely all the men I asked chose one and the women the other one. There was no variation; men one way, women the other. I’m not sure what that says.

I’m in this envious position of choosing a cover because I’m enrolled in a wonderful course with the Writing New South Wales (Writing NSW ) and called –‘ Self Publish Your Book’.

I didn’t know it was going to be so wonderful when I paid the fee – a large fee I thought as I transferred the money. I wondered if I would get value for the outlay. I once attended a day course about self-publishing and felt daunted by the enormity of the task. I wondered if I would be able to keep up or whether I would spend the time floundering around in a dense fog.

There has been a bit of fog but with the amazing tutor’s help and support, I have arrived at a time where I am giving feed back to a designer on my cover!! Wow.

It’s more than wow it’s ‘Woo-hoo’ as a friend said. I agree Woo hoo x3. And Woo-hoo to Joel Naoum, the tutor, who has brought me this far.

Back to the covers; when I get the one I have chosen back from the designer with the minor changes I’ve decided on I’ll let you see them all and you can give me your feedback. That way I won’t be thrown into the dilemma of indecision I’ve been in the last few days. It will be too late to change anything.

‘Why is there a photo of wisteria in this post?’ you ask.  There is no reason other than I have been blown away by the blossom all over my neighbourhood – up lifting and inspiriting.  I just had to share it. 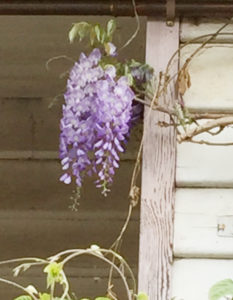 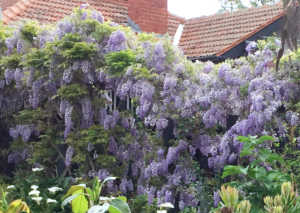